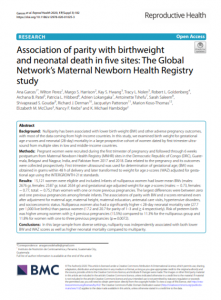 Nulliparity has been associated with lower birth weight (BW) and other adverse pregnancy outcomes, with most of the data coming from high-income countries. In this study, we examined birth weight for gestational age z-scores and neonatal (28-day) mortality in a large prospective cohort of women dated by first trimester ultrasound from multiple sites in low and middle-income countries.

Pregnant women were recruited during the first trimester of pregnancy and followed through 6 weeks postpartum from Maternal Newborn Health Registry (MNHR) sites in the Democratic Republic of Congo (DRC), Guatemala, Belagavi and Nagpur, India, and Pakistan from 2017 and 2018. Data related to the pregnancy and its outcomes were collected prospectively. First trimester ultrasound was used for determination of gestational age; (BW) was obtained in grams within 48 h of delivery and later transformed to weight for age z-scores (WAZ) adjusted for gestational age using the INTERGROWTH-21st standards.

15,121 women were eligible and included. Infants of nulliparous women had lower mean BWs (males: 2676 gr, females: 2587 gr, total: 2634 gr) and gestational age adjusted weight for age z-scores (males: − 0.73, females: − 0.77, total: − 0.75,) than women with one or more previous pregnancies. The largest differences were between zero and one previous pregnancies among female infants. The associations of parity with BW and z-scores remained even after adjustment for maternal age, maternal height, maternal education, antenatal care visits, hypertensive disorders, and socioeconomic status. Nulliparous women also had a significantly higher < 28-day neonatal mortality rate (27.7 per 1,000 live births) than parous women (17.2 and 20.7 for parity of 1–3 and ≥ 4 respectively). Risk of preterm birth was higher among women with ≥ 4 previous pregnancies (15.5%) compared to 11.3% for the nulliparous group and 11.8% for women with one to three previous pregnancies (p = 0.0072).