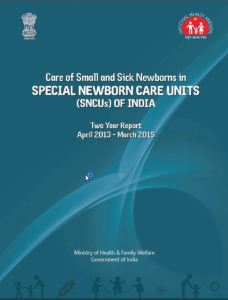 This report provides a comprehensive overview of the progress made by India in terms of establishment and functionality of Special Newborn Care Units (SNCUs) during the two year period from April 2013 to March 2015. It describes the progress in the operational status (numbers, bed strength, human resource availability), the profile of babies admitted in these units and of those babies who died during stay. In addition it provides individual state specific statistics to facilitate differential planning and better monitoring of these units in India.

Special Newborn Care Units (SNCUs) are being established at district hospitals and sub-district hospitals with annual delivery load more than 3000 to provide care for sick newborns, that is, all type of neonatal care except assisted ventilation and major surgeries. It is a separate unit in close proximity to the labour room with 12 or more beds, and are managed by adequately trained doctors, staff nurses and support staff to provide 24*7 services.

This report has been prepared utilizing the information available from the routine monitoring system established in 2010-2011 by the Child Health Division, Ministry of Health and Family Welfare (MoHFW), Government of India. Monthly reports submitted by individual SNCUs were collated at the State level and then submitted to the National level on a quarterly basis. Data from the States was checked for completeness and accuracy, and a set of selected indicators calculated. Submission of records was considered an essential pre-requisite for SNCU to be considered as an operational unit, and units with less than 4 beds were not considered for the final analysis.