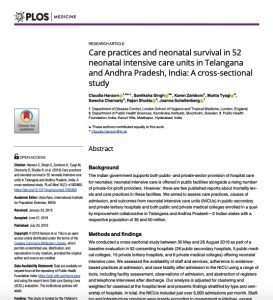 The Indian government supports both public- and private-sector provision of hospital care for neonates: neonatal intensive care is offered in public facilities alongside a rising number of private-for-profit providers. However, there are few published reports about mortality levels and care practices in these facilities. We aimed to assess care practices, causes of admission, and outcomes from neonatal intensive care units (NICUs) in public secondary and private tertiary hospitals and both public and private medical colleges enrolled in a quality improvement collaborative in Telangana and Andhra Pradesh—2 Indian states with a respective population of 35 and 50 million.

We conducted a cross-sectional study between 30 May and 26 August 2016 as part of a baseline evaluation in 52 consenting hospitals (26 public secondary hospitals, 5 public medical colleges, 15 private tertiary hospitals, and 6 private medical colleges) offering neonatal intensive care. We assessed the availability of staff and services, adherence to evidence-based practices at admission, and case fatality after admission to the NICU using a range of tools, including facility assessment, observations of admission, and abstraction of registers and telephone interviews after discharge. Our analysis is adjusted for clustering and weighted for caseload at the hospital level and presents findings stratified by type and ownership of hospitals. In total, the NICUs included just over 3,000 admissions per month. Staffing and infrastructure provision were largely according to government guidelines, except that only a mean of 1 but not the recommended 4 paediatricians were working in public secondary NICUs per 10 beds. On admission, all neonates admitted to private hospitals had auscultation (100%, 19 of 19 observations) but only 42% (95% confidence interval [CI] 25%–62%, p-value for difference is 0.361) in public secondary hospitals. The most common single cause of admission was preterm birth (25%) followed by jaundice (23%). Case-fatality rates at age 28 days after admission to a NICU were 4% (95% CI 2%–8%), 15% (9%–24%), 4% (2%–8%) and 2% (1%–5%) (Chi-squared p = 0.001) in public secondary hospitals, public medical colleges, private tertiary hospitals, and private medical colleges, respectively, according to facility registers. Case fatality according to postdischarge telephone interviews found rates of 12% (95% CI 7%–18%) for public secondary hospitals. Roughly 6% of admitted neonates were referred to another facility. Outcome data were missing for 27% and 8% of admissions to private tertiary hospitals and private medical colleges. Our study faced the limitation of missing data due to incomplete documentation. Further generalizability was limited due to the small sample size among private facilities.

Our findings suggest differences in quality of neonatal intensive care and 28-day survival between the different types of hospitals, although comparison of outcomes is complicated by differences in the case mix and referral practices between hospitals. Uniform reporting of outcomes and risk factors across the private and public sectors is required to assess the benefits for the population of mixed-care provision.