Home > Resources > Changes in rates of early exclusive breast feeding in South Africa from 2010 to 2013: data from three national surveys before and during implementation of a change in national breastfeeding policy 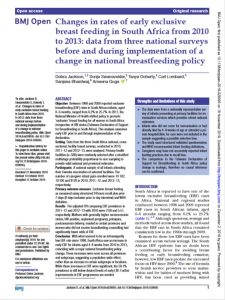 Between 1998 and 2009 reported exclusive breastfeeding (EBF) rates in South African infants, aged 0–6 months, ranged from 6.2% to 25.7%. In 2011, the National Minister of Health shifted policy to promote ‘exclusive’ breast feeding for all women in South Africa irrespective of HIV status (Tshwane Declaration of Support for Breastfeeding in South Africa). This analysis examines early EBF prior to and through implementation of the declaration.

Data from the three South Africa national, cross- sectional, facility- based surveys, conducted in 2010, 2011–12 and 2012–13, were analysed. Primary health facilities (n=580) were randomly selected after a stratified multistage probability proportional- to- size sampling to provide valid national and provincial estimates.

Exclusive breast feeding as measured using structured 24 hours recall plus prior 7 days (8 days inclusive prior to day interview) and WHO definition.

The adjusted OR comparing EBF prevalence in 2011–12 and 2012–13 with 2010 were 2.08 and 5.51, respectively. Mothers with generally higher socioeconomic status, HIV- positive, unplanned pregnancy, primipara, postcaesarean delivery, resided in certain provinces and women who did not receive breastfeeding counselling had significantly lower odds of EBF.

With what seemed to be an intransigently low EBF rate since 1998, South Africa saw an increase in early EBF for infants aged 4–8 weeks from 2010 to 2013, coinciding with a major national breastfeeding policy change. These increases were seen across all provinces and subgroups, suggesting a population- wide effect, rather than an increase in certain subgroups or locations. While these increases in EBF were significant, the 59.1% prevalence is still below desired levels of early EBF. Further improvements in EBF programmes are needed.