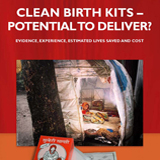 For centuries, a clean birth has been recognized as essential to the health and survival of both mothers and newborns. Nevertheless, each year an estimated 1 million newborns and mothers will die from infections soon after birth (Figure 1). This policy brief summarizes the current state of knowledge on clean birth practices and the potential role for clean birth kits (CBK) in supporting these preventive practices and for saving lives. The content draws on several recent scientific reviews and a Technical Workshop on Clean Birth Kits held in London on March 25-26th 2010. This Workshop was the first in a series of technical meetings to review issues related to commodities and kits at the time of birth. Further policy briefs are expected.

SITUATION (Pages 4 – 5)
Each year around 1 million newborns and mothers die from infections soon after birth, and this burden
is highest for the poorest families. Progress for skilled attendance at birth has been slow – only 13 of 68 Countdown countries have increased coverage by more than 10% since 1990. Of the world’s 60 million home births each year, many occur without adequate hygiene. Indeed some facility births also lack basic hygienic care. Immediate solutions are necessary to address this.

EVIDENCE (Pages 7 – 9)
A systematic review identified 30 studies showing that clean birth practices can substantially reduce neonatal mortality and morbidity from infection-related causes, including tetanus. In 3 of the studies (1 Randomized Controlled Trial (RCT)), a reduction in maternal sepsis was additionally reported. Evidence from 3 studies, including 1 RCT, supports the role of CBKs in promoting clean birth practices, although in all cases there were co-interventions. Conducting RCTs of clean birth practices compared to unclean would be unethical and as a consequence, evidence regarding clean birth practices is overall of low quality. However as there is strong biological plausibility and this is an accepted standard of care, the GRADE recommendation for clean practices at birth is strong.

ESTIMATES OF LIVES SAVED AND COST (Pages 10 – 11)
If 90% of all home births applied clean practices (54 million births), then the lives of an estimated 6,300 women and 102,000 newborns would be saved each year. Uptake of such practices may be catalyzed by CBKs. The estimated cost of CBKs is between $ 0.17 and $ 0.73 per birth, depending on whether made locally or imported. If CBKs are made locally this amounts to a cost of around $215 per life saved. Hence, although CBKS may avert a comparatively small proportion of all maternal and neonatal deaths, as the costs are low, they are highly cost-effective interventions for both women and babies and also most likely to benefit the poorest families. The number of lives saved would be greater for facility births since “safe as well as clean” practices could be provided, although the cost would be much higher.

EXPERIENCE IN IMPLEMENTING CLEAN BIRTH KITS and EVIDENCE GAPS (Pages 12 – 14)
CBKs use is reported in at least 51 countries, and in some countries are national policy and widely used. We did not identify any studies comparing different approaches to implementing clean birth kits. Important research gaps remain, particularly the effect of CBKs on uptake of facility birth, and also the effect of varying implementation and distribution strategies. There is an urgent need for more data before birth kits are expanded to include additional commodities.

ACTION NOW (Page15)
Safe birth is a basic right for mothers and newborns. Clean birth forms an important part of this right, and must be promoted alongside other proven interventions such as universal access to skilled attendance at birth and referral systems strengthening to access emergency obstetric and newborn care. Mother-held CBKs are highly cost effective and considered appropriate in conflict or humanitarian emergencies, or in settings where there is currently low coverage of facility birth, as long as they do not act as a disincentive for facility birth. If mother-held CBKS act as an incentive for facility care, wider promotion would be justifiable.