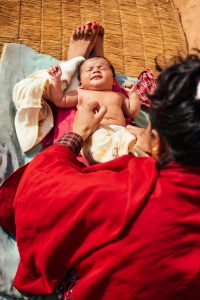 Rupa and Rajkumar's first born daughter was born in the newly constructed Taruka health facility. Midwife Rita helped deliver the newborn. The proximity of the health post has helped save the newborn's life as well as an expensive trip to Kathmandu. During her pregnancy Rita visited the health post frequently where she was assured by the health workers that her pregnancy was normal and she should not be worried. Rupa with her newly born daughter at the heath post. She was extremely nervous and worried days before her delivery as she had grown up hearing stories of women losing their lives during child birth The family of three are living at their relative’s house (temporary shelter) and run a shop for a living. Rupa often gives her daughter an oil massage which helps strengthens muscles of newborns. Rupa and her husband are extremely happy to have their daughter in their life and share equal responsibilities of taking care of their daughter.

The Helping Babies Breathe (HBB) educational program focuses on training of first-level birth attendants in neonatal resuscitation skills for the first minute of life (The Golden Minute). Pre-post studies of HBB implementation in sub-Saharan Africa and Asia have shown reductions in facility-based very early neonatal mortality and stillbirth rates. However, the Global Network pre-post HBB Implementation Study (GN-HBB-IS) found no difference in day 7 perinatal mortality rates (PMR-D7) among births to women participating in the Global Network’s Maternal and Newborn Health Registry. To address potential differences in perinatal outcomes in births occurring in facilities that implemented HBB vs. all births occurring in the communities served by facilities that implemented HBB, we compared day-1 perinatal mortality rates (PMR-D1) among births occurring pre and post HBB implementation in facilities in Nagpur, India, one of the 3 sites participating in the GN-HBB-IS.

We hypothesized that there would be a 20% decrease in the Nagpur facility based PMR-D1 in the 12 months post GN HBB implementation from the pre-period. We explored pre-post differences in stillbirth rates (SBR) and day-1 neonatal mortality rates (NMR-D1).

In the Nagpur-HBB-FS, PMR-D1, stillbirths and NMR-D1 were significantly lower after HBB implementation. These benefits did not translate to improvements in PMR-D7 in communities served by these facilities, possibly because facilities in which HBB was implemented covered an insufficient proportion of community births or because additional interventions are needed after day 1 of life. Further studies are needed to determine how to translate facility-based improvements in PMR-D1 to improved neonatal survival in the community.