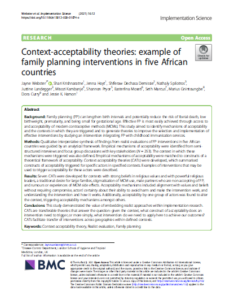 Family planning (FP) can lengthen birth intervals and potentially reduce the risk of foetal death, low birthweight, prematurity, and being small for gestational age. Effective FP is most easily achieved through access to and acceptability of modern contraceptive methods (MCMs). This study aimed to identify mechanisms of acceptability and the contexts in which they are triggered and to generate theories to improve the selection and implementation of effective interventions by studying an intervention integrating FP with childhood immunisation services.

Seven CATs were developed for contexts with strong beliefs in religious values and with powerful religious leaders, a traditional desire for large families, stigmatisation of MCM use, male partners who are non-accepting of FP, and rumours or experiences of MCM side effects. Acceptability mechanisms included alignment with values and beliefs without requiring compromise, actors’ certainty about their ability to avoid harm and make the intervention work, and understanding the intervention and how it works. Additionally, acceptability by one group of actors was found to alter the context, triggering acceptability mechanisms amongst others.

This study demonstrated the value of embedding realist approaches within implementation research. CATs are transferable theories that answer the question: given the context, what construct of acceptability does an intervention need to trigger, or more simply, what intervention do we need to apply here to achieve our outcomes? CATs facilitate transfer of interventions across geographies within defined contexts.