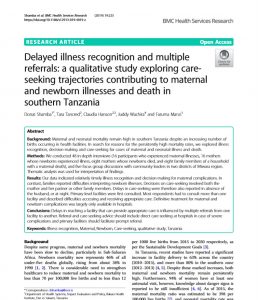 Maternal and neonatal mortality remain high in southern Tanzania despite an increasing number of births occurring in health facilities. In search for reasons for the persistently high mortality rates, we explored illness recognition, decision-making and care-seeking for cases of maternal and neonatal illness and death.

We conducted 48 in-depth interviews (16 participants who experienced maternal illnesses, 16 mothers whose newborns experienced illness, eight mothers whose newborns died, and eight family members of a household with a maternal death), and five focus group discussions with community leaders in two districts of Mtwara region. Thematic analysis was used for interpretation of findings.

Our data indicated relatively timely illness recognition and decision-making for maternal complications. In contrast, families reported difficulties interpreting newborn illnesses. Decisions on care-seeking involved both the mother and her partner or other family members. Delays in care-seeking were therefore also reported in absence of the husband, or at night. Primary-level facilities were first consulted. Most respondents had to consult more than one facility and described difficulties accessing and receiving appropriate care. Definitive treatment for maternal and newborn complications was largely only available in hospitals.

Delays in reaching a facility that can provide appropriate care is influenced by multiple referrals from one facility to another. Referral and care-seeking advice should include direct care-seeking at hospitals in case of severe complications and primary facilities should facilitate prompt referral.