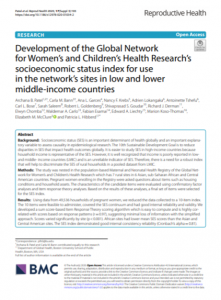 Socioeconomic status (SES) is an important determinant of health globally and an important explanatory variable to assess causality in epidemiological research. The 10th Sustainable Development Goal is to reduce disparities in SES that impact health outcomes globally. It is easier to study SES in high-income countries because household income is representative of the SES. However, it is well recognized that income is poorly reported in low- and middle- income countries (LMIC) and is an unreliable indicator of SES. Therefore, there is a need for a robust index that will help to discriminate the SES of rural households in a pooled dataset from LMIC.

The study was nested in the population-based Maternal and Neonatal Health Registry of the Global Network for Women’s and Children’s Health Research which has 7 rural sites in 6 Asian, sub-Saharan African and Central American countries. Pregnant women enrolling in the Registry were asked questions about items such as housing conditions and household assets. The characteristics of the candidate items were evaluated using confirmatory factor analyses and item response theory analyses. Based on the results of these analyses, a final set of items were selected for the SES index.

Using data from 49,536 households of pregnant women, we reduced the data collected to a 10-item index. The 10 items were feasible to administer, covered the SES continuum and had good internal reliability and validity. We developed a sum score-based Item Response Theory scoring algorithm which is easy to compute and is highly correlated with scores based on response patterns (r = 0.97), suggesting minimal loss of information with the simplified approach. Scores varied significantly by site (p < 0.001). African sites had lower mean SES scores than the Asian and Central American sites. The SES index demonstrated good internal consistency reliability (Cronbach’s alpha = 0.81). Higher SES scores were significantly associated with formal education, more education, having received antenatal care, and facility delivery (p < 0.001).