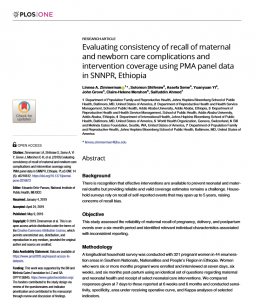 There is recognition that effective interventions are available to prevent neonatal and maternal deaths, but providing reliable and valid coverage estimates remains a challenge. Household surveys rely on recall of self-reported events that may span up to five years, raising concerns of recall bias.

This study assessed the reliability of maternal recall of pregnancy, delivery, and postpartum events over a six-month period, and identified relevant individual characteristics associated with inconsistent reporting.

A longitudinal household survey was conducted with 321 pregnant women in 44 enumeration areas in Southern Nationals, Nationalities and People’s Region in Ethiopia. Women who were six or more months pregnant were enrolled and interviewed at seven days, six weeks, and six months post-partum using an identical set of questions regarding maternal and neonatal health and receipt of select neonatal care interventions. The study compared responses given at seven days to those reported at six weeks and six months and conducted sensitivity, specificity, area under receiving operative curve, and Kappa analyses of selected indicators.

The study found that reporting complications is higher at the first interview after birth than at either the six-week or six-month interviews. The specificity of the majority of complications is high, however sensitivity is generally much lower. The sensitivity of reporting any complication during pregnancy, delivery, or post-partum ranged from 54.5% to 67.6% at the 6-week interview and from 39.2% to 63.2% at the 6-month interview. Though sensitivity of receipt of neonatal interventions was high, specificity and kappa demonstrate low consistency.

As with childbirth, it may be that during the first seven days women note symptoms with higher scrutiny, but if these do not later develop into serious health issues, they may be forgotten over time. Maternal complications and care are likely to be under-reported by women if interviewed for distant events.