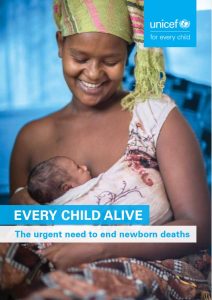 Every year, 2.6 million babies die before turning one month old. One million of them take their first and last breaths on the day they are born. Another 2.6 million are stillborn.

Each of these deaths is a tragedy, especially because the vast majority are preventable. More than 80 per cent of newborn deaths are the result of premature birth, complications during labour and delivery and infections such as sepsis, meningitis and pneumonia. Similar causes, particularly complications during labour, account for a large share of stillbirths. Millions of young lives could be saved every year if mothers and babies had access to affordable, quality health care, good nutrition and clean water. But far too often, even these basics are out of reach of the mothers and babies who need them most.

Deaths among children aged 1 month to 5 years old have fallen dramatically in recent decades. But progress in reducing the deaths of newborn babies – those aged less than 1 month – has been less impressive, with 7,000 newborns still dying every day. This is partly because newborn deaths are difficult to address with a single drug or intervention – they require a system-wide approach. It is also due to a lack of momentum and global commitment to newborn survival. We are failing the youngest, most vulnerable people on the planet – and with so many millions of lives at stake, time is of the essence.

As this report shows, the risk of dying as a newborn varies enormously depending on where a baby is born. Babies born in Japan stand the best chance of surviving, with just 1 in 1,000 dying during the first 28 days. Children born in Pakistan face the worst odds: Of every 1,000 babies born, 46 die before the end of their first month – almost 1 in 20.