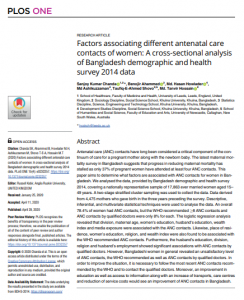 Antenatal care (ANC) contacts have long been considered a critical component of the continuum of care for a pregnant mother along with the newborn baby. The latest maternal mortality survey in Bangladesh suggests that progress in reducing maternal mortality has stalled as only 37% of pregnant women have attended at least four ANC contacts. This paper aims to determine what factors are associated with ANC contacts for women in Bangladesh.

We analysed the data, provided by Bangladesh demographic and health survey 2014, covering a nationally representative sample of 17,863 ever married women aged 15–49 years. A two-stage stratified cluster sampling was used to collect the data. Data derived from 4,475 mothers who gave birth in the three years preceding the survey. Descriptive, inferential, and multivariate statistical techniques were used to analyse the data.

In order to improve the situation, it is necessary to follow the most recent ANC contacts recommended by the WHO and to contact the qualified doctors. Moreover, an improvement in education as well as access to information along with an increase of transports, care centres and reduction of service costs would see an improvement of ANC contacts in Bangladesh.