Home > Resources > Group B streptococcus infection during pregnancy and infancy: estimates of regional and global burden 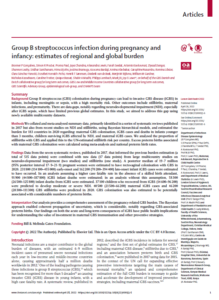 Group B streptococcus (GBS) colonisation during pregnancy can lead to invasive GBS disease (iGBS) in infants, including meningitis or sepsis, with a high mortality risk. Other outcomes include stillbirths, maternal infections, and prematurity. There are data gaps, notably regarding neurodevelopmental impairment (NDI), especially after iGBS sepsis, which have limited previous global estimates. In this study, we aimed to address this gap using newly available multicountry datasets.

We collated and meta-analysed summary data, primarily identified in a series of systematic reviews published in 2017 but also from recent studies on NDI and stillbirths, using Bayesian hierarchical models, and estimated the burden for 183 countries in 2020 regarding: maternal GBS colonisation, iGBS cases and deaths in infants younger than 3 months, children surviving iGBS affected by NDI, and maternal iGBS cases. We analysed the proportion of stillbirths with GBS and applied this to the UN-estimated stillbirth risk per country. Excess preterm births associated with maternal GBS colonisation were calculated using meta-analysis and national preterm birth rates.

Our analysis provides a comprehensive assessment of the pregnancy-related GBS burden. The Bayesian approach enabled coherent propagation of uncertainty, which is considerable, notably regarding GBS-associated preterm births. Our findings on both the acute and long-term consequences of iGBS have public health implications for understanding the value of investment in maternal GBS immunisation and other preventive strategies.