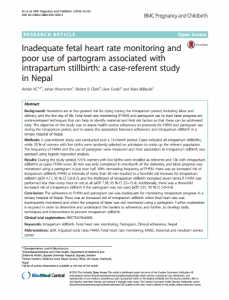 Background: Newborns are at the greatest risk for dying during the intrapartum period, including labor and delivery, and the first day of life. Fetal heart rate monitoring (FHRM) and partogram use to track labor progress are evidence-based techniques that can help to identify maternal and fetal risk factors so that these can be addressed early. The objective of this study was to assess health worker adherence to protocols for FHRM and partogram use during the intrapartum period, and to assess the association between adherence and intrapartum stillbirth in a tertiary hospital of Nepal.

Methods: A case-referent study was conducted over a 15-month period. Cases included all intrapartum stillbirths, while 20% of women with live births were randomly selected on admission to make up the referent population. The frequency of FHRM and the use of partogram were measured and their association to intrapartum stillbirth was assessed using logistic regression analysis.

Conclusion: The adherence to FHRM and partogram use was inadequate for monitoring intrapartum progress in a tertiary hospital of Nepal. There was an increased risk of intrapartum stillbirth when fetal heart rate was inadequately monitored and when the progress of labor was not monitored using a partogram. Further exploration is required in order to determine and understand the barriers to adherence; and further, to develop tools, techniques and interventions to prevent intrapartum stillbirth.