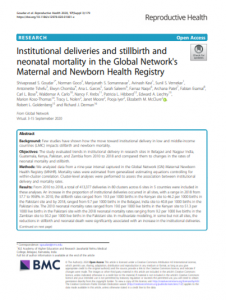 Few studies have shown how the move toward institutional delivery in low and middle-income countries (LMIC) impacts stillbirth and newborn mortality.

The study evaluated trends in institutional delivery in research sites in Belagavi and Nagpur India, Guatemala, Kenya, Pakistan, and Zambia from 2010 to 2018 and compared them to changes in the rates of neonatal mortality and stillbirth.