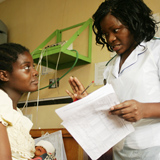 Netsayi Gowero of Blantyre, Malawi was recognized as this year’s runner up. She along with winners Christine Sammy from Kitui, Kenya and Anila Ali Bardai of Karachi, Pakistan were selected from nominations sent from across the globe. They received their awards during the opening ceremony of 8th International Neonatal Nursing Conference 2013 in Belfast, Northern Ireland on September 6, 2013.

Malawi has the highest preterm birth rate in the world. 18 out of every 1,000 babies are born too soon. Its health system faces challenges that impact the survival of newborn babies. Registered nurse-midwife Netsayi Gowero works in one of the country’s busiest hospitals, Queen Elizabeth Central Hospital in Blantyre. She specializes in the care of sick and preterm babies. In the hospital’s Chatinkha Nursery Unit, Netsayi helps to manage newborn infection and provides new mothers with breastfeeding support and teaches Kangaroo Mother Care as part of their postnatal care.

Netsayi has long wanted to be a nurse and strives to grow as she advances in her career as a neonatal nurse.  She looks to continuing making progress in lowering infection rates and increasing the number of babies that leave the hospital healthy.

The award is sponsored by the Council of Neonatal Nurses (COINN) and Save the Children.

Council of International Neonatal Nurses, INC (COINN), Save the Children