Home > Resources > Interventions for common perinatal mental disorders in women in low- and middle-income countries: a systematic review and meta-analysis 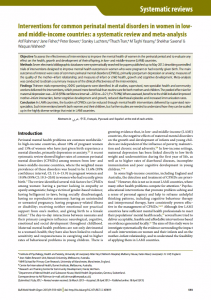 Perinatal mental health problems are common worldwide. In high-income countries, about 10% of pregnant women and 13% of women who have just given birth experience a mental disorder, primarily depression or anxiety. A recent systematic review showed higher rates of common perinatal mental disorders (CPMDs) among women from low- and lower-middle-income countries, where the weighted mean prevalence of these disorders was found to be 15.6% (95% confidence interval, CI: 15.4–15.9) in pregnant women and 19.8% (95% CI: 19.5–20.0) in women who had recently given birth.

The review identified several risk factors for CPMDs among women: having a partner lacking in empathy or openly antagonistic; being a victim of gender-based violence; having belligerent in-laws; being socially disadvantaged; having no reproductive autonomy; having an unintended or unwanted pregnancy; having pregnancy-related illness or disability; receiving neither emotional nor practical support from one’s mother, and giving birth to a female infant. The day-to-day interactions between neonates and their primary caregivers influence neurological, cognitive, emotional and social development throughout childhood. Maternal mental health problems are not only detrimental to a woman’s health; they have also been linked to reduced sensitivity and responsiveness in caregiving and to higher rates of behavioural problems in young children. There is growing evidence that, in low- and middle-income (LAMI) countries, the negative effects of maternal mental disorders on the growth and development of infants and young children are independent of the influence of poverty, malnutrition and chronic social adversity. In low-income settings, maternal depression has been linked directly to low birth weight and undernutrition during the first year of life, as well as to higher rates of diarrhoeal diseases, incomplete immunization and poor cognitive development in young children.