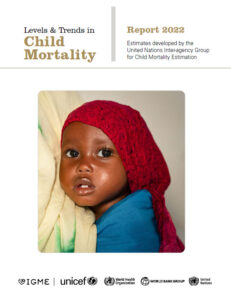 In total, more than 5.0 million children under age 5, including 2.3 million newborns, along with 2.1 million children and youth aged 5 to 24 years – 43 per cent of whom are adolescents – died in 2021. This tragic and massive loss of life, most of which was due to preventable or treatable causes, is a stark reminder of the urgent need to end preventable deaths of children and young people. Sadly, these deaths were mostly preventable with widespread and effective interventions like improved care around the time of birth, vaccination, nutritional supplementation and water and sanitation programmes.

Timely, high-quality and disaggregated data – which allow the most vulnerable children to be identified – are critical to achieving the goal of ending preventable deaths of children. Yet as the COVID-19 pandemic has put into stark light, data of this nature are more the exception than the rule: Just 36 countries have high-quality nationally representative data on under-five mortality for 2021, while about half the world’s countries have no data on child mortality in the last five years. These substantial data gaps pose enormous challenges to policy- and decision-making and prolong the need for modelling mortality from what little data are available. To improve the availability, quality and timeliness of data for monitoring the health and survival situation of children and youth, much greater investments must be made to strengthen data systems.

Almost everywhere in the world, a child born today has a better chance at surviving to age 5 than in 1990, but inequities persist among and within countries

Globally, the under-five mortality rate (U5MR) fell to 38 deaths per 1,000 live births in 2021, while under-five deaths dropped to 5.0 million. This immense, intolerable and mostly preventable loss of life was carried unequally around the world however, and children continue to face widely differing chances of survival based on where they are born. In contrast to the global rate, children born in sub-Saharan Africa are subject to the highest risk of childhood death in the world with a 2021 U5MR of 74 deaths per 1,000 live births – 15 times higher than the risk for children in Europe and Northern America and 19 times higher than in the region of Australia and New Zealand

Divergent chances of survival start from the earliest ages