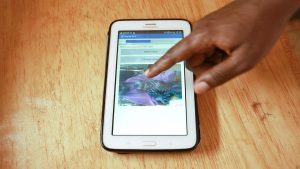 While early identification of neonatal illness can impact neonatal mortality rates and reduce the burden of treatment, identifying subtle clinical signs and symptoms of possible severe illness is especially challenging in neonates. The World Health Organization and the United Nations Children’s Fund developed the Integrated Management of Neonatal Childhood Illness guidelines, an evidence-based tool highlighting seven danger signs to assess neonatal health. Currently, many mothers in low-resource settings rely on home visits from community health workers (CHWs) to determine if their baby is sick. However, CHWs visit infrequently, and illness is often detected too late to impact survival. Thus, delays in illness identification pose a significant barrier to providing expedient and effective care. Neonatal Monitoring (NeMo), a novel neonatal assessment tool, seeks to increase the frequency of neonatal screening by task-shifting identification of neonatal danger signs from CHWs to mothers.

This study aimed to explore the usability and acceptability of the NeMo system among target users and volunteer CHWs by assessing ease of use and learnability.

Simulated device use and semistructured interviews were conducted with 32 women in the Iganga-Mayuge districts in eastern Uganda to evaluate the usability of the NeMo system, which involves a smartphone app paired with a low cost, wearable band to aid in identification of neonatal illness. Two versions of the app were evaluated using a mixed methods approach, and version II of the app contained modifications based on observations of the first cohort’s use of the system. During the posed scenario simulations, participants were offered limited guidance from the study team in order to probe the intuitiveness of the NeMo system. The ability to complete a set of tasks with the system was tested and recorded for each participant and closed- and open-ended questions were used to elicit user feedback. Additionally, focus groups with 12 CHWs were conducted to lend additional context and insight to the usability and feasibility assessment.

A total of 13/22 subjects (59%) using app version I and 9/10 subjects (90%) using app version II were able to use the phone and app with no difficulty, despite varying levels of smartphone experience. Following modifications to the app’s audio instructions in version II, participants’ ability to accurately answer qualitative questions concerning neonatal danger signs improved by at least 200% for each qualitative danger sign. All participants agreed they would trust and use the NeMo system to assess the health of their babies. Furthermore, CHWs emphasized the importance of community sensitization towards the system to encourage its adoption and regular use, as well as the decision to seek care based on its recommendations.

The NeMo system is an intuitive platform for neonatal assessment in a home setting and was found to be acceptable to women in rural Uganda.