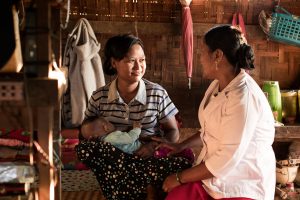 Zar Chi Oo, 29, breastfeeds her 3 month old boy during a routine visit by Auxiliary Midwife San Myint Aye, 24. She received emergency referral support from Save the Children including 49,000 Kyats for transportation and meals charges during her stay at the hospital for the delivery of her baby. She received prenatal care and is also receiving postnatal care by the midwife of who has been supported by Save the Children’s program.

We assessed population-based cross-sectional Demographic and Health Surveys (DHS) from 51 LMICs. Data from the most recent DHS in each country (conducted between January 2000 and January 2019) with data available on IPV and breastfeeding practices were used. By WHO region, 52.9% (27/51) were from Africa, 11.8% (6/51) from the Americas, 7.8% (4/51) from the Eastern Mediterranean, 11.8% (6/51) from Europe, 11.8% (6/51) from South-East Asia, and 3.9% (2/51) from the Western Pacific. We estimated multilevel logistic regression models for any IPV and each type of IPV separately (physical violence, sexual violence, and emotional violence), accounting for demographic and socioeconomic factors. Depending on specification, the sample size varied between 95,320 and 102,318 mother–infant dyads. The mean age of mothers was 27.5 years, and the prevalence of any lifetime exposure to IPV among mothers was 33.3% (27.6% for physical violence, 8.4% for sexual violence, and 16.4% for emotional violence). Mothers exposed to any IPV were less likely to initiate breastfeeding early (adjusted odds ratio [AOR]: 0.88 [95% CI 0.85–0.97], p < 0.001) and breastfeed exclusively in the first 6 months (AOR: 0.87 [95% CI 0.82–0.92], p < 0.001). The associations were similar for each type of IPV and were overall consistent across infant’s sex and WHO regions. After simultaneously adjusting for all 3 types of IPV, all 3 types of IPV were independently associated with decreased likelihood of early breastfeeding initiation, but only exposure to physical violence was independently associated with a decreased likelihood of exclusively breastfeeding in the first 6 months. The main limitations of this study included the use of cross-sectional datasets, the possibility of residual confounding of the observed associations by household wealth, and the possibility of underreporting of IPV experiences attenuating the magnitude of observed associations.

Our study indicates that mothers exposed to any form of IPV (physical, sexual, or emotional violence) were less likely to initiate breastfeeding early and breastfeed exclusively in the first 6 months. These findings may inform the argument for antenatal screening for IPV in LMICs and the provision of services to not only improve mothers’ safety and well-being, but also support them in adopting recommended breastfeeding practices.