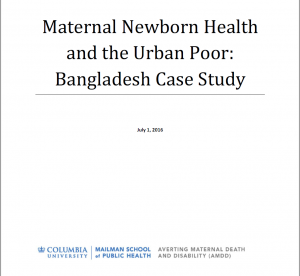 Since 1971, Bangladesh has been moving rapidly from a largely rural, village-based society to a bustling, increasingly urban nation. Of all of the transformations in the past forty-five years, perhaps none is more stunning than the rapid improvement in health and health services. In particular, Bangladesh has made substantial progress in outcomes related to maternal, child and to a lesser extend newborn health (MNCH). Maternal mortality has fallen from 574 deaths per 100,000 live births (in 1991) to 194 deaths per 100,000 live births (in 2010) (Chowdhury et al., 2013). The infant mortality rate has been reduced by more than half, decreasing from 88 per 1,000 live births (1993-94) to 31 per 1,000 live births (2015) (Chowdhury et al., 2013; The World Bank, 2016). In each measure, Bangladesh has achieved lower rates than its neighbors, including Pakistan, Nepal and India. Neonatal mortality has reduced as well with Bangladesh making more progress than most low-income countries (Rubayet et al., 2012). Aided by a strong non-governmental organization (NGO) presence, the country has pioneered the use of community health workers (CHWs) alongside pro-poor and gender equitable policies.

The rapidly changing urban landscape of Bangladesh has led to increasingly unequal outcomes for mothers and their infants. In order to assist Save the Children’s Saving Newborn Lives program in responding to this situation in an efficient and informed manner, an analysis of the slum population, urban health policies, existing MNH programs and key actors has been undertaken. This analysis describes the current urban environment in Bangladesh, the policy and donor context for program implementation and some specific initiatives Save the Children could consider to address growing MNH inequalities within Bangladeshi cities. As a country case study, it is part of a broader scoping of MNH for the urban poor globally.