Home > Resources > Mistreatment of newborns after childbirth in health facilities in Nepal: Results from a prospective cohort observational study 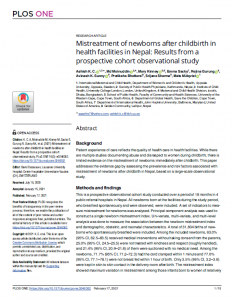 Patient experience of care reflects the quality of health care in health facilities. While there are multiple studies documenting abuse and disrespect to women during childbirth, there is limited evidence on the mistreatment of newborns immediately after childbirth. This paper addresses the evidence gap by assessing the prevalence and risk factors associated with mistreatment of newborns after childbirth in Nepal, based on a large-scale observational study.

This is a prospective observational cohort study conducted over a period of 18 months in 4 public referral hospitals in Nepal. All newborns born at the facilities during the study period, who breathed spontaneously and were observed, were included. A set of indicators to measure mistreatment for newborns was analysed. Principal component analysis was used to construct a single newborn mistreatment index. Uni-variate, multi-variate, and multi-level analysis was done to measure the association between the newborn mistreatment index and demographic, obstetric, and neonatal characteristics. A total of 31,804 births of newborns who spontaneously breathed were included. Among the included newborns, 63.0% (95% CI, 62.5–63.5) received medical interventions without taking consent from the parents, 25.0% (95% CI, 24.5–25.5) were not treated with kindness and respect (roughly handled), and 21.4% (95% CI, 20.9–21.8) of them were suctioned with no medical need. Among the newborns, 71.7% (95% CI, 71.2–72.3) had the cord clamped within 1 minute and 77.6% (95% CI, 77.1–78.1) were not breast fed within 1 hour of birth. Only 3.5% (95% CI, 3.2–3.8) were kept in skin to skin contact in the delivery room after birth. The mistreatment index showed maximum variation in mistreatment among those infants born to women of relatively disadvantaged ethnic groups and infants born to women with 2 or previous births. After adjusting for hospital heterogeneity, infants born to women aged 30–34 years (β, -0.041; p value, 0.01) and infants born to women aged 35 years or more (β, -0.064; p value, 0.029) were less mistreated in reference to infants born to women aged 18 years or less. Infants born to women from the relatively disadvantaged (chhetri) ethnic groups (β, 0.077; p value, 0.000) were more likely to be mistreated than the infants born to relatively advantaged (brahmin) ethnic groups. Female newborns (β, 0.016; p value, 0.015) were more likely to be mistreated than male newborns.