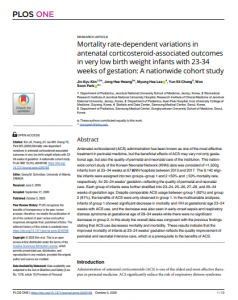 Antenatal corticosteroid (ACS) administration has been known as one of the most effective treatment in perinatal medicine, but the beneficial effects of ACS may vary not only gestational age, but also the quality of perinatal and neonatal care of the institution.

Despite comparable ACS usage between group 1 (82%) and group 2 (81%), the benefits of ACS were only observed in group 1. In the multivariable analyses, infants of group 1 showed significant decrease in mortality and IVH at gestational age 23–24 weeks with ACS use, and the decrease was also seen in early-onset sepsis and respiratory distress syndrome at gestational age of 29–34 weeks while there were no significant decrease in group 2.

In this study the overall data was congruent with the previous findings stating that ACS use decreases mortality and morbidity. These results indicate that the improved mortality of infants at 23–24 weeks’ gestation reflects the quality improvement of perinatal and neonatal intensive care, which is a prerequisite to the benefits of ACS.