Home > Resources > National, regional, and worldwide estimates of low birthweight in 2015, with trends from 2000: a systematic analysis 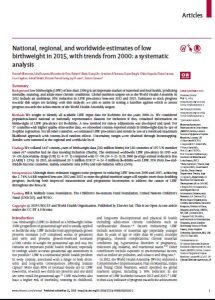 Low birthweight (LBW) of less than 2500 g is an important marker of maternal and fetal health, predicting mortality, stunting, and adult-onset chronic conditions. Global nutrition targets set at the World Health Assembly in 2012 include an ambitious 30% reduction in LBW prevalence between 2012 and 2025. Estimates to track progress towards this target are lacking; with this analysis, we aim to assist in setting a baseline against which to assess progress towards the achievement of the World Health Assembly targets.

We sought to identify all available LBW input data for livebirths for the years 2000–16. We considered population-based national or nationally representative datasets for inclusion if they contained information on birthweight or LBW prevalence for livebirths. A new method for survey adjustment was developed and used. For 57 countries with higher quality time-series data, we smoothed country-reported trends in birthweight data by use of B-spline regression. For all other countries, we estimated LBW prevalence and trends by use of a restricted maximum likelihood approach with country-level random effects. Uncertainty ranges were obtained through bootstrapping. Results were summed at the regional and worldwide level.

Although these estimates suggest some progress in reducing LBW between 2000 and 2015, achieving the 2·74% AARR required between 2012 and 2025 to meet the global nutrition target will require more than doubling progress, involving both improved measurement and programme investments to address the causes of LBW throughout the lifecycle.