Home > Resources > National, regional, and worldwide estimates of stillbirth rates in 2015, with trends from 2000: a systematic analysis 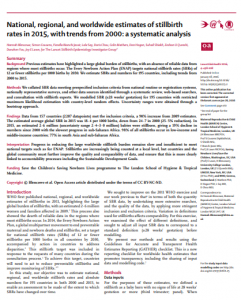 Previous estimates have highlighted a large global burden of stillbirths, with an absence of reliable data from regions where most stillbirths occur. The Every Newborn Action Plan (ENAP) targets national stillbirth rates (SBRs) of 12 or fewer stillbirths per 1000 births by 2030. We estimate SBRs and numbers for 195 countries, including trends from 2000 to 2015.

Progress in reducing the large worldwide stillbirth burden remains slow and insuffi cient to meet national targets such as for ENAP. Stillbirths are increasingly being counted at a local level, but countries and the global community must further improve the quality and comparability of data, and ensure that this is more clearly linked to accountability processes including the Sustainable Development Goals.