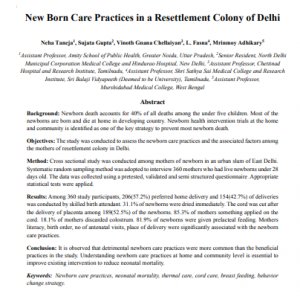 Newborn death accounts for 40% of all deaths among the under five children. Most of the newborns are born and die at home in developing country. Newborn health intervention trials at the home and community is identified as one of the key strategy to prevent most newborn death.

The study was conducted to assess the newborn care practices and the associated factors among the mothers of resettlement colony in Delhi.

Cross sectional study was conducted among mothers of newborn in an urban slum of East Delhi. Systematic random sampling method was adopted to interview 360 mothers who had live newborns under 28 days old. The data was collected using a pretested, validated and semi structured questionnaire .Appropriate statistical tests were applied.

Among 360 study participants, 206(57.2%) preferred home delivery and 154(42.7%) of deliveries was conducted by skilled birth attendant. 31.1% of newborns were dried immediately. The cord was cut after the delivery of placenta among 189(52.5%) of the newborns. 85.3% of mothers something applied on the cord. 18.1% of mothers discarded colostrum. 81.9% of newborns were given prelacteal feeding. Mothers literacy, birth order, no of antenatal visits, place of delivery were significantly associated with the newborn
care practices.