Home > Resources > Nurturing the Health and Wealth of Nations: The Investment Case for Breastfeeding 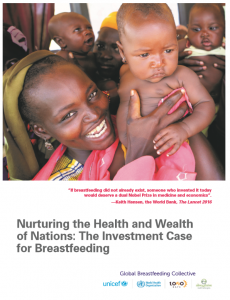 Throughout the past several years, there has been a surge in scientific evidence that shows just how critical breastfeeding is to human health and development. Recent analyses have confirmed the impact breastfeeding has on preventing diarrhea and pneumonia—two major causes of child mortality—and on the cognitive development and IQ of children, which impacts educational attainment, participation in the workforce and lifetime earnings. Studies have also revealed the impact breastfeeding has on reducing the risk of ovarian and breast cancer, two leading causes of death among women. While these effects are most acutely felt at the individual level, they also accrue at the societal level. In other words, breastfeeding benefits not just mothers and children, but also entire economies.

The World Bank’s new Investment Framework for Nutrition notes that meeting the WHA target for excusive breastfeeding in the first six months would save 520,000 children’s lives over the next 10 years. In addition, if the WHA target were to be reached by 2025, almost $300 billion in additional economic gains across lower- and middle-income countries could be generated as a result of improved cognitive development and child survival rates. The analysis found that every dollar invested in achieving the breastfeeding target generates a return of $35 in economic benefits.

Additional research has also shown that employers and other providers of health services will accrue annual savings in healthcare expenditures if breastfeeding rates increase, thanks to fewer prescriptions and reduced absenteeism rates. Healthcare costs for newborns could be as much as three times lower, with fewer hospitalizations and insurance claims. The United States alone could save $13 billion per year if 90 percent of families were meeting the recommendation to exclusively breastfeed up to six months of age.