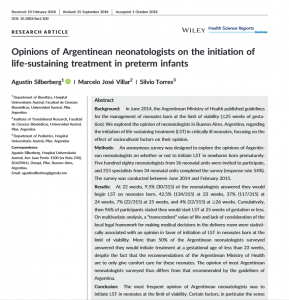 In June 2014, the Argentinean Ministry of Health published guidelines for the management of neonates born at the limit of viability (≤25 weeks of gestation). We explored the opinion of neonatologists in Buenos Aires, Argentina, regarding the initiation of life‐sustaining treatment (LST) in critically ill neonates, focusing on the effect of sociocultural factors on their opinion.

An anonymous survey was designed to explore the opinions of Argentinean neonatologists on whether or not to initiate LST in newborns born prematurely. Five hundred eighty neonatologists from 36 neonatal units were invited to participate, and 315 specialists from 34 neonatal units completed the survey (response rate 54%). The survey was conducted between June 2014 and February 2015.

At 22 weeks, 9.5% (30/315) of the neonatologists answered they would begin LST on neonates born, 42.5% (134/315) at 23 weeks, 37% (117/315) at 24 weeks, 7% (22/315) at 25 weeks, and 4% (12/315) at ≥26 weeks. Cumulatively, then 96% of participants stated they would start LST at 25 weeks of gestation or less. On multivariate analysis, a “transcendent” value of life and lack of consideration of the local legal framework for making medical decisions in the delivery room were statistically associated with an opinion in favor of initiation of LST in neonates born at the limit of viability. More than 50% of the Argentinean neonatologists surveyed answered they would initiate treatment at a gestational age of less than 23 weeks, despite the fact that the recommendations of the Argentinean Ministry of Health are to only give comfort care for these neonates. The opinion of most Argentinean neonatologists surveyed thus differs from that recommended by the guidelines of Argentina.

The most frequent opinion of Argentinean neonatologists was to initiate LST in neonates at the limit of viability. Certain factors, in particular the sense of a transcendent meaning to life and lack of consideration of the local legal framework for making medical decisions in the delivery room, seem to influence the decision to start LST.