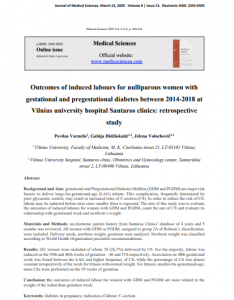 Gestational and Pregestational Diabetes Mellitus (GDM and PGDM) are major risk factors to deliver large-for-gestational-age (LAG) infants. This complication, frequently determined by poor glycaemic control, may result in increased rates of C-section (CS). In order to reduce the risk of CS, labour may be inducted before term since smaller fetus is expected. The aim of this study was to evaluate the outcomes of induced labours for women with GDM and PGDM, count the rate of CS and evaluate its relationship with gestational week and newborn‘s weight.

An electronic patient history from Santaros Clinics’ database of 4 years and 5 months was reviewed. All women with GDM or PGDM, assigned to group 2A of Robson’s classification, were included. Delivery mode, newborn weight, gestation were analyzed. Newborn weight was classified according to World Health Organization percentile recommendations.

262 women were included of whom 70 (26,7%) delivered by CS. For the majority, labour was induced on the 39th and 40th weeks of gestation – 46 and 154 respectively. Association on 40th gestational week was found between the LAG and higher frequency of CS, while the percentage of CS was almost constant irrespectively of the week for fetuses with normal weight. For fetuses, smaller-for-gestational-age, more CSs were performed on the 39 weeks of gestation.

The outcomes of induced labour for women with GDM and PGDM are more related to the weight of the infant than gestation week.