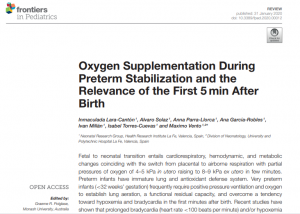 Fetal to neonatal transition entails cardiorespiratory, hemodynamic, and metabolic changes coinciding with the switch from placental to airborne respiration with partial pressures of oxygen of 4–5 kPa in utero raising to 8–9 kPa ex utero in few minutes.

Recent studies have shown that prolonged bradycardia (heart rate <100 beats per minute) and/or hypoxemia (oxygen saturation <80%) are associated with increased mortality and/or intracranial hemorrhage. However, despite the accumulated evidence, the way in which oxygen should be supplemented in the first minutes after birth still has not yet been clearly established.

The initial inspired fraction of oxygen and its adjustment within a safe arterial oxygen saturation range measured by pulse oximetry that avoids hyper-or-hypoxia is still a matter of debate.

Herewith, we present a current summary aiming to assist the practical neonatologist who has to aerate the lung and establish an efficacious respiration in very preterm infants in the delivery room.