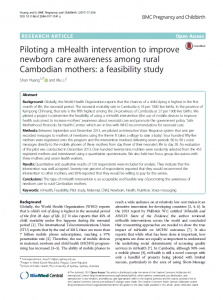 Background: Globally, the World Health Organization reports that the chances of a child dying is highest in the first month of life, the neonatal period. The neonatal mortality rate in Cambodia is 18 per 1000 live births. In the province of Kampong Chhnang, that rate is the fifth highest among the 24 provinces of Cambodia at 27 per 1000 live births. We piloted a project to determine the feasibility of using a mHealth intervention (the use of mobile devices to improve health outcomes) to increase mothers’ awareness about neonatal care and promote the government policy ‘Safe Motherhood Protocols for Health Centres’ which are in line with WHO recommendations for neonatal care.

Methods: Between September and December 2013, we piloted an Interactive Voice Response system that sent prerecorded messages to mothers of newborns using the theme ‘It takes a village to raise a baby’. Four hundred fifty-five mothers were registered onto this program and the intervention involved delivering seven periodic 60 to 90 s voice messages directly to the mobile phones of these mothers from day three of their neonate’s life to day 28. An evaluation of the pilot was conducted in December 2013. One hundred twenty-nine mothers were randomly selected from the 455 registered mothers and interviewed using a quantitative questionnaire. We also held two focus group discussions with three mothers and seven health workers.

Conclusions: This type of mHealth intervention is an acceptable and feasible way of promoting the awareness of newborn care to rural Cambodian mothers.