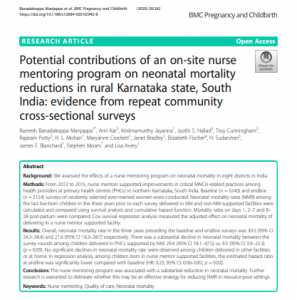 We assessed the effects of a nurse mentoring program on neonatal mortality in eight districts in India.

The nurse mentoring program was associated with a substantial reduction in neonatal mortality. Further research is warranted to delineate whether this may be an effective strategy for reducing NMR in resource-poor settings.