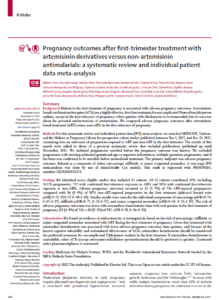 For this systematic review and individual patient data (IPD) meta-analysis, we searched MEDLINE, Embase, and the Malaria in Pregnancy Library for prospective cohort studies published between Nov 1, 2015, and Dec 21, 2021, containing data on outcomes of pregnancies exposed to ABT and non-ABT in the first trimester. The results of this search were added to those of a previous systematic review that included publications published up until November, 2015. We included pregnancies enrolled before the pregnancy outcome was known. We excluded pregnancies with missing estimated gestational age or exposure information, multiple gestation pregnancies, and if the fetus was confirmed to be unviable before antimalarial treatment. The primary endpoint was adverse pregnancy outcome, defined as a composite of either miscarriage, stillbirth, or major congenital anomalies. A one-stage IPD meta-analysis was done by use of shared-frailty Cox models. This study is registered with PROSPERO, number CRD42015032371.

We found no evidence of embryotoxicity or teratogenicity based on the risk of miscarriage, stillbirth, or major congenital anomalies associated with ABT during the first trimester of pregnancy. Given that treatment with artemether–lumefantrine was associated with fewer adverse pregnancy outcomes than quinine, and because of the known superior tolerability and antimalarial effectiveness of ACTs, artemether–lumefantrine should be considered the preferred treatment for uncomplicated P falciparum malaria in the first trimester. If artemether–lumefantrine is unavailable, other ACTs (except artesunate–sulfadoxine–pyrimethamine) should be preferred to quinine. Continued active pharmacovigilance is warranted.