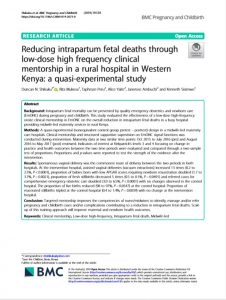 Intrapartum fetal mortality can be prevented by quality emergency obstetrics and newborn care (EmONC) during pregnancy and childbirth. This study evaluated the effectiveness of a low-dose high-frequency onsite clinical mentorship in EmONC on the overall reduction in intrapartum fetal deaths in a busy hospital providing midwife-led maternity services in rural Kenya.

A quasi-experimental (nonequivalent control group pretest – posttest) design in a midwife-led maternity care hospitals. Clinical mentorship and structured supportive supervision on EmONC signal functions was conducted during intervention. Maternity data at two similar time points: Oct 2015 to July 2016 (pre) and August 2016 to May 2017 (post) reviewed. Indicators of interest at Kirkpatrick’s levels 3 and 4 focusing on change in practice and health outcomes between the two time periods were evaluated and compared through a two-sample test of proportions. Proportions and p-values were reported to test the strength of the evidence after the intervention.

Spontaneous vaginal delivery was the commonest route of delivery between the two periods in both hospitals. At the intervention hospital, assisted vaginal deliveries (vacuum extractions) increased 13 times (0.2 to 2.5%, P < 0.0001), proportion of babies born with low APGAR scores requiring newborn resuscitation doubled (1.7 to 3.7%, P = 0.0021), proportion of fresh stillbirths decreased 5 times (0.5 to 0.1%, P = 0.0491) and referred cases for comprehensive emergency obstetric care doubled (3.0 to 6.5%, P < 0.0001) with no changes observed in the control hospital. The proportion of live births reduced (98 to 97%, P = 0.0547) at the control hospital. Proportion of macerated stillbirths tripled at the control hospital (0.4 to 1.4%, P = 0.0039) with no change at the intervention hospital.

Targeted mentorship improves the competencies of nurse/midwives to identify, manage and/or refer pregnancy and childbirth cases and/or complications contributing to a reduction in intrapartum fetal deaths. Scale up of this training approach will improve maternal and newborn health outcomes.