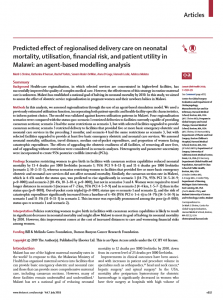 Health-care regionalisation, in which selected services are concentrated in higher-level facilities, has successfully improved the quality of complex medical care. However, the effectiveness of this strategy in routine maternal care is unknown. Malawi has established a national goal of halving its neonatal mortality by 2030. In this study, we aimed to assess the effect of obstetric service regionalisation in pregnant women and their newborn babies in Malawi.

Policies restricting women to give birth in facilities with Caesarean section capabilities is likely to result in significant decreases in neonatal mortality and might allow Malawi to meet its goal of halving its neonatal mortality by 2030. However, this improvement comes at the cost of increased distances to care and worsening financial risks among women.