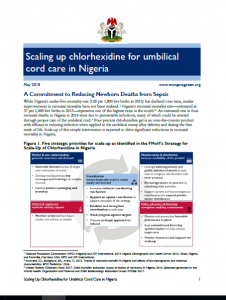 While Nigeria’s under-five mortality rate (128 per 1,000 live births in 2013) has declined over time, similar improvements in neonatal mortality have not been realized. Nigeria’s neonatal mortality rate—estimated at 37 per 1,000 live births in 2013—represents one of the highest rates in the world. An estimated one in four neonatal deaths in Nigeria in 2016 were due to preventable infections, many of which could be averted through proper care of the umbilical cord. Four percent chlorhexidine gel is an over-the-counter product with efficacy in reducing infection when applied to the umbilical stump after delivery and during the first week of life. Scale-up of this simple intervention is expected to drive significant reductions in neonatal mortality in Nigeria.