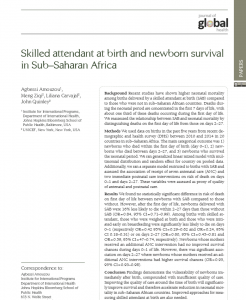 Recent studies have shown higher neonatal mortality among births delivered by a skilled attendant at birth (SAB) compared to those who were not in sub–Saharan African countries. Deaths during the neonatal period are concentrated in the first 7 days of life, with about one third of these deaths occurring during the first day of life. We reassessed the relationship between SAB and neonatal mortality by distinguishing deaths on the first day of life from those on days 2–27.

We used data on births in the past five years from recent demographic and health survey (DHS) between 2010 and 2014 in 20 countries in sub–Saharan Africa. The main categorical outcome was 1) newborns who died within the first day of birth (day 0–1), 2) newborns who died between days 2–27, and 3) newborns who survived the neonatal period. We ran generalized linear mixed model with multinomial distribution and random effect for country on pooled data. Additionally, we ran a separate model restricted to births with SAB and assessed the association of receipt of seven antenatal care (ANC) and two immediate postnatal care interventions on risk of death on days 0–1 and days 2–27. These variables were assessed as proxy of quality of antenatal and postnatal care.

Findings demonstrate the vulnerability of newborns immediately after birth, compounded with insufficient quality of care. Improving the quality of care around the time of birth will significantly improve survival and therefore accelerate reduction in neonatal mortality in sub–Saharan African countries. Improved approaches for measuring skilled attendant at birth are also needed.