Home > Resources > The first Global Pneumonia Forum: recommendations in the time of coronavirus 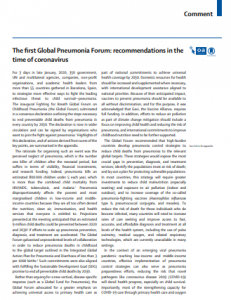 For 3 days in late January, 2020, 350 government, UN and multilateral agencies, companies, non-profit organisations, and academic health leaders from more than 55 countries gathered in Barcelona, Spain, to strategise more effective ways to fight the leading infectious threat to child survival—pneumonia. The inaugural Fighting for Breath Global Forum on Childhood Pneumonia (the Global Forum) culminated in a consensus declaration outlining the steps necessary to end preventable child deaths from pneumonia in every country by 2030. The declaration is now in wider circulation and can be signed by organisations who want to join the fight against pneumonia.

Highlights of this declaration, and of actions derived from some of the key points, are summarised in the appendix.

The rationale for organising such an event was the perceived neglect of pneumonia, which is the number one killer of children after the neonatal period, but suffers in terms of visibility, financial investments, and research funding. Indeed, pneumonia kills an estimated 800 000 children under 5 each year, which is more than the combined child mortality from HIV/AIDS, tuberculosis, and malaria.

Pneumonia disproportionately affects the poorest and most marginalised children in low-income and middle-income countries because they are all too often denied the nutrition, clean air, immunisation, and health services that everyone is entitled to. Projections presented at the meeting anticipated that an estimated 9 million child deaths could be prevented between 2020 and 2030 if efforts to scale up pneumonia prevention, diagnosis, and treatment are accelerated. The Global Forum galvanised unprecedented levels of collaboration in order to reduce pneumonia deaths in childhood to the global target outlined in the Integrated Global Action Plan for Pneumonia and Diarrhoea of less than 3 per 1000 births. Such commitments were also aligned with fulfilling the Sustainable Development Goal (SDG) promise to end all preventable child deaths by 2030.