Home > Resources > A randomized crossover trial comparing the Nifty cup to a medicine cup in preterm infants who have difficulty breastfeeding at Komfo Anokye Teaching Hospital (KATH) in Kumasi, Ghana 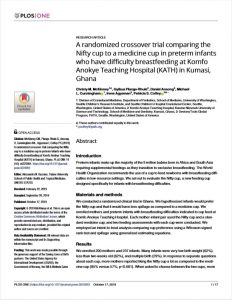 We conducted a randomized clinical trial in Ghana. We hypothesized infants would prefer the Nifty cup and that it would have less spillage as compared to a medicine cup. We enrolled mothers and preterm infants with breastfeeding difficulties indicated to cup feed at Komfo Anokye Teaching Hospital. Each mother-infant pair used the Nifty cup and a standard medicine cup; and two feeding assessments with each cup were conducted. We employed an intent-to-treat analysis comparing cup preference using a Wilcoxon signed rank test and spillage using generalized estimating equations.

We enrolled 200 mothers and 237 infants. Many infants were very low birth weight (62%), less than two weeks old (62%), and multiple birth (29%). In response to separate questions about each cup, more mothers reported liking the Nifty cup a lot as compared to the medicine cup (85% versus 57%, p<0.001). When asked to choose between the two cups, more than 75% preferred the Nifty cup (p < 0.001). There was slightly less spillage with the Nifty cup (8.9%) versus the medicine cup (9.3%), which was not statistically significant (p = 0.35). Mothers reported greater confidence and ease of using the Nifty cup and greater use one-month post-discharge compared to the medicine cup (p-values <0.001). Nearly all mothers were breastfeeding and cup feeding their infants at study initiation and at one-month post-discharge.

This is the first randomized clinical trial of cup feeding in sub-Saharan Africa. Mothers prefer the Nifty cup to a medicine cup for supplemental feeds to their preterm infant. The Nifty cup was used with greater ease and confidence. The Nifty cup can offer an improved feeding experience for the mother-infant pair.