Home > Resources > Achieving and sustaining impact at scale for a newborn intervention in Nepal: a mixed-methods study 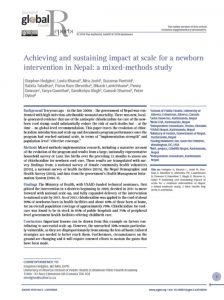 Ten years ago – in the late 2000s – the government of Nepal was confronted with high infection-attributable neonatal mortality. There was new, locally-generated evidence that use of the antiseptic chlorhexidine for care of the newborn cord stump could substantially reduce the risk of such deaths but – at the time – no global-level recommendation. This paper traces the evolution of chlorhexidine introduction and scale up and documents program performance once the program had reached national scale, in terms of “implementation strength” and population-level “effective coverage.”

Mixed methods implementation research, including a narrative account of the evolution of the program and results from a large, nationally-representative household survey of 3,661 live births over the preceding 12 months to assess use of chlorhexidine for newborn cord-care. These results are triangulated with survey findings from: a national survey of female community health volunteers (2015), a national survey of health facilities (2015), the Nepal Demographic and Health Survey (2016), and data from the government’s Health Management Information System (2016-7).

The Ministry of Health, with USAID-funded technical assistance, first piloted the intervention in 4 districts beginning in 2009, decided in 2011 to move forward with national scale-up, and fully expanded delivery of the intervention to national scale by 2017. As of 2017, chlorhexidine was applied to the cord of about 90% of newborns born in health facilities and about 40% of those born at home, for an overall population coverage of approximately 70%. Chlorhexidine for cord-care was found to be in stock in 85% of public hospitals and 75% of peripheral level government health facilities offering childbirth care.

Important lessons can be drawn from this example on factors contributing to successful scale-up. However, the unreached 30% remain particularly vulnerable, as they are disproportionately from among the less affluent; tailored strategies are needed to better reach them. Furthermore, circumstances on the ground are changing and it will require renewed efforts to sustain the gains that have been made.