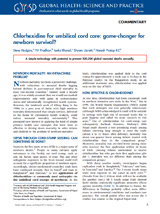 Sepsis in the first week or two of life is a major cause of newborn deaths. People in many cultures apply substances to the freshly cut cord stump, such as ash, oil, butter, spice pastes, or mud. This and other unhygienic exposures to the fresh wound could well account for a significant proportion of newborn sepsis.

Accordingly, cluster-randomized controlled trials have been conducted recently, first in Nepal and then in Bangladesh and Pakistan, to test application of chlorhexidine—a commonly used antiseptic—to the umbilical cord stumps of newborns. In the trials, chlorhexidine was applied daily to the cord stump for approximately a week (up to 14 days in the Pakistan study). In the Bangladesh study, in an additional treatment arm, chlorhexidine was applied only on the day of birth.

All 3 trials completed to date have shown a protective effect, with a reduction in mortality risk of 23% in a pooled analysis.

Ministry of Health and Population, Government of Nepal