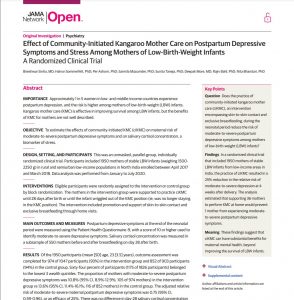 Approximately 1 in 5 women in low- and middle-income countries experience postpartum depression, and the risk is higher among mothers of low-birth-weight (LBW) infants. Kangaroo mother care (KMC) is effective in improving survival among LBW infants, but the benefits of KMC for mothers are not well described.

To estimate the effects of community-initiated KMC (ciKMC) on maternal risk of moderate-to-severe postpartum depressive symptoms and on salivary cortisol concentration, a biomarker of stress.

This was an unmasked, parallel-group, individually randomized clinical trial. Participants included 1950 mothers of stable LBW infants (weighing 1500-2250 g) in rural and semiurban low-income populations in North India enrolled between April 2017 and March 2018. Data analysis was performed from January to July 2020.

Eligible participants were randomly assigned to the intervention or control group by block randomization. The mothers in the intervention group were supported to practice ciKMC until 28 days after birth or until the infant wriggled out of the KMC position (ie, was no longer staying in the KMC position). The intervention included promotion and support of skin-to-skin contact and exclusive breastfeeding through home visits.

Postpartum depressive symptoms at the end of the neonatal period were measured using the Patient Health Questionnaire–9, with a score of 10 or higher used to identify moderate-to-severe depressive symptoms. Salivary cortisol concentration was measured in a subsample of 550 mothers before and after breastfeeding on day 28 after birth.