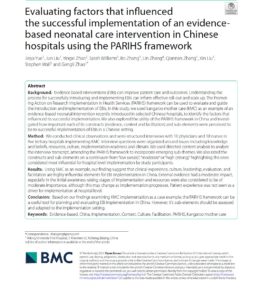 Evidence based interventions (EBIs) can improve patient care and outcomes. Understanding the process for successfully introducing and implementing EBIs can inform effective roll-out and scale up. The Promoting Action on Research Implementation in Health Services (PARIHS) framework can be used to evaluate and guide the introduction and implementation of EBIs. In this study, we used kangaroo mother care (KMC) as an example of an evidence-based neonatal intervention recently introduced in selected Chinese hospitals, to identify the factors that influenced its successful implementation. We also explored the utility of the PARIHS framework in China and investigated how important each of its constructs (evidence, context and facilitation) and sub-elements were perceived to be to successful implementation of EBIs in a Chinese setting.

We conducted clinical observations and semi-structured interviews with 10 physicians and 18 nurses in five tertiary hospitals implementing KMC. Interview questions were organized around issues including knowledge and beliefs, resources, culture, implementation readiness and climate. We used directed content analysis to analyze the interview transcript, amending the PARIHS framework to incorporate emerging sub-themes. We also rated the constructs and sub-elements on a continuum from “low (weak)”, “moderate” or “high (strong)” highlighting the ones considered most influential for hospital level implementation by study participants.

Using KMC as an example, our finding suggest that clinical experience, culture, leadership, evaluation, and facilitation are highly influential elements for EBI implementation in China. External evidence had a moderate impact, especially in the initial awareness raising stages of implementation and resources were also considered to be of moderate importance, although this may change as implementation progresses. Patient experience was not seen as a driver for implementation at hospital level.