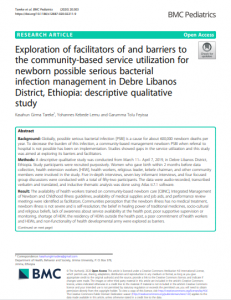 Globally, possible serious bacterial infection [PSBI] is a cause for about 600,000 newborn deaths per year. To decrease the burden of this infection, a community-based management newborn PSBI when referral to hospital is not possible has been on implementation. Studies showed gaps in the service utilization and this study was aimed at exploring its barriers and facilitators.

The availability of health workers trained on community-based newborn care [CBNC], Integrated Management of Newborn and Childhood Illness guidelines, availability of medical supplies and job aids, and performance review meetings were identified as facilitators. Communities perception that the newborn illness has no medical treatment, newborn illness is not severe and is self-resolution; the belief in healing power of traditional medicines, socio-cultural and religious beliefs, lack of awareness about service availability at the health post, poor supportive supervision or monitoring, shortage of HEW, the residency of HEWs outside the health post, a poor commitment of health workers and HEWs, and non-functionality of health developmental army were explored as barriers.