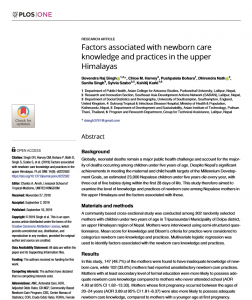 Globally, neonatal deaths remain a major public health challenge and account for the majority of deaths occurring among children under five years of age. Despite Nepal’s significant achievements in meeting the maternal and child health targets of the Millennium Development Goals, an estimated 23,000 Nepalese children under five years die every year, with three out of five babies dying within the first 28 days of life. This study therefore aimed to examine the level of knowledge and practices of newborn care among Nepalese mothers in the upper Himalayas and the factors associated with these.

A community based cross-sectional study was conducted among 302 randomly selected mothers with children under two years of age in Tripurasundari Municipality of Dolpa district, an upper Himalayan region of Nepal. Mothers were interviewed using semi-structured questionnaires. Mean score for knowledge and Bloom’s criteria for practice were considered to categorize newborn care knowledge and practices. Multivariate logistic regression was used to identify factors associated with the newborn care knowledge and practices.

The study revealed high prevalence of inadequate newborn care and knowledge amongst mothers in upper Himalayan dwellings. Approximately one third of all interviewed mothers practiced suboptimal newborn care. The results indicate an urgent need to increase awareness of neonatal services available to mothers and to prioritize investments by local governments in neonatal health services, in order to improve accessibility and quality of care for mothers and newborns.