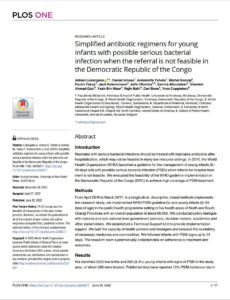 Neonates with serious bacterial infections should be treated with injectable antibiotics after hospitalization, which may not be feasible in many low resource settings. In 2015, the World Health Organization (WHO) launched a guideline for the management of young infants (0-59 days old) with possible serious bacterial infection (PSBI) when referral for hospital treatment is not feasible. We evaluated the feasibility of the WHO guideline implementation in the Democratic Republic of the Congo (DRC) to achieve high coverage of PSBI treatment.

From April 2016 to March 2017, in a longitudinal, descriptive, mixed methods implementation research study, we implemented WHO PSBI guideline for sick young infants (0-59 dyas of age) in the public health programme setting in five health areas of North and South Ubangi Provinces with an overall population of about 60,000. We conducted policy dialogue with national and sub-national level government planners, decision-makers, academics and other stakeholders. We established a Technical Support Unit to provide implementation support. We built the capacity of health workers and managers and ensured the availability of necessary medicines and commodities. We followed infants with PSBI signs up to 14 days. The research team systematically collected data on adherence to treatment and outcomes.

We identified 3050 live births and 285 (9.3%) young infants with signs of PSBI in the study area, of whom 256 were treated. Published data have reported 10% PSBI incidence rate in young infants. Therefore, the estimated coverage of treatment was 83.9% (256/305). Another 426 from outside the study catchment area were also identified with PSBI signs by the nurses of a health centre within the study area. Thus, a total of 711 young infants with PSBI were identified, 285 (40%) 7-59 days old infants had fast breathing (pneumonia), 141 (20%) 0-6 days old had fast breathing (severe pneumonia), 233 (33%) had signs of clinical severe infection (CSI), and 52 (7%) had signs of critical illness. Referral to a hospital was advised to 426 (60%) infants with CSI, critical illness or severe pneumonia. The referral was refused by 282 families who accepted simplified antibiotic treatment on an outpatient basis at the health centres. Treatment failure among those who received outpatient treatment occurred in 10/128 (8%) with severe pneumonia, 25/147 (17%) with CSI, including one death, and 2/7 (29%) young infants with a critical illness. Among 285 infants with pneumonia, 257 (90%) received oral amoxicillin treatment, and 8 (3%) failed treatment. Adherence to outpatient treatment was 98% to 100% for various PSBI sub-categories. Among 144 infants treated in a hospital, 8% (1/13) with severe pneumonia, 23% (20/86) with CSI and 40% (18/45) with critical illness died.