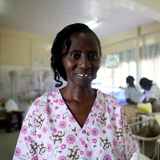 In Ghana, 30 out of every 1000 newborns won’t live past their first month of life. Regina Obeng is the principal nursing officer and manager of the Neonatal Unit at Komfo Anokye Teaching Hospital in Ghana’s second biggest city, Kumasi. With 22 years experience in the field, she is a neonatal nursing expert and has been the driving force behind her hospital’s introduction of Kangaroo Mother Care, promotion of exclusive breastfeeding and increased infection control. She has never had the opportunity to have an official neonatal nurse qualification and yet has chosen to dedicate her life to Ghana’s newborns.
Regina Obeng had several nominations for the award. One nomination said, “She is not at all afraid of confronting doctors on the ward who she feels are cutting corners in the care of a sick newborn. She cries when a preventable death occurs in our neonatal unit due to a mother lack of knowledge or lack of expertise in our part of the world.”
Despite the fact that nurses provide the majority of care to sick newborns in health facilities, there are very few nurses like Regina Obeng who dedicate themselves to newborn care, which is a major chalenge for neonatal units worldwide. There is an acute shortage of neonatal nurses internationally and particular in resource-limited countries where there is a desperate need for accredited training in advanced neonatal nursing practice.
This award was also created to highlight the fact that skilled nursing care is critical to the reduction of the global neonatal death toll of 3.6 million newborns a year. Meeting the global Millennium Development Goal (MDG) 4 for child survival will be increasingly determined by how well countries can reduce newborn deaths, as now more than 40 percent of under-five deaths globally occur in the first month of life.