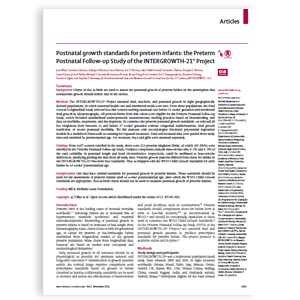 Background Charts of size at birth are used to assess the postnatal growth of preterm babies on the assumption that extrauterine growth should mimic that in the uterus.

The INTERGROWTH-21st Project assessed fetal, newborn, and postnatal growth in eight geographically defined populations, in which maternal health care and nutritional needs were met. From these populations, the Fetal Growth Longitudinal Study selected low-risk women starting antenatal care before 14 weeks’ gestation and monitored fetal growth by ultrasonography. All preterm births from this cohort were eligible for the Preterm Postnatal Follow-up Study, which included standardised anthropometric measurements, feeding practices based on breastfeeding, and data on morbidity, treatments, and development. To construct the preterm postnatal growth standards, we selected all live singletons born between 26 and before 37 weeks’ gestation without congenital malformations, fetal growth restriction, or severe postnatal morbidity. We did analyses with second-degree fractional polynomial regression models in a multilevel framework accounting for repeated measures. Fetal and neonatal data were pooled from study sites and stratified by postmenstrual age. For neonates, boys and girls were assessed separately.

From 4607 women enrolled in the study, there were 224 preterm singleton births, of which 201 (90%) were enrolled in the Preterm Postnatal Follow-up Study. Variance component analysis showed that only 0·2% and 4·0% of the total variability in postnatal length and head circumference, respectively, could be attributed to between-site differences, justifying pooling the data from all study sites. Preterm growth patterns differed from those for babies in the INTERGROWTH-21st Newborn Size Standards. They overlapped with the WHO Child Growth Standards for term babies by 64 weeks’ postmenstrual age.