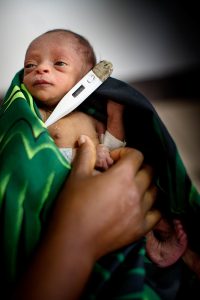 Katherine, a mother who recently gave birth to her newborn baby, Ellesi had spent several days at the neonatal ward at Queen Elizabeth Hospital, Malawi. She was being taught the KMC (Kangaroo Mother Care) method to use on her baby.

Aetiological data for neonatal infections are essential to inform policies and programme strategies, but such data are scarce from sub-Saharan Africa. We therefore completed a systematic review and meta-analysis of available data from the African continent since 1980, with a focus on regional differences in aetiology and antimicrobial resistance (AMR) in the past decade (2008–18).

We included data for microbiologically confirmed invasive bacterial infection including meningitis and AMR among neonates in sub-Saharan Africa and assessed the quality of scientific reporting according to Strengthening the Reporting of Observational Studies in Epidemiology for Newborn Infection (STROBE-NI) checklist. We calculated pooled proportions for reported bacterial isolates and AMR.

Hospital-acquired neonatal infections and AMR are a major burden in Africa. More population-based neonatal infection studies and improved routine surveillance are needed to improve clinical care, plan health systems approaches, and address AMR. Future studies should be reported according to standardised reporting guidelines, such as STROBE-NI, to aid comparability and reduce research waste.