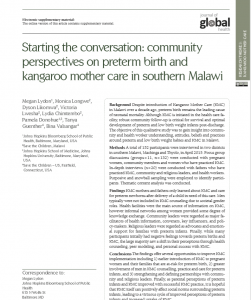 Despite introduction of Kangaroo Mother Care (KMC) in Malawi over a decade ago, preterm birth remains the leading cause of neonatal mortality. Although KMC is initiated in the health care facility, robust community follow-up is critical for survival and optimal development of preterm and low birth weight infants post-discharge. The objective of this qualitative study was to gain insight into community and health worker understanding, attitudes, beliefs and practices around preterm and low birth weight babies and KMC in Malawi.

A total of 152 participants were interviewed in two districts in southern Malawi, Machinga and Thyolo, in April 2015. Focus group discussions (groups = 11, n = 132) were conducted with pregnant women, community members and women who have practiced KMC. In-depth interviews (n = 20) were conducted with fathers who have practiced KMC, community and religious leaders, and health workers. Purposive and snowball sampling were employed to identify participants. Thematic content analysis was conducted.

KMC mothers and fathers only learned about KMC and care for preterm newborns after delivery of a child in need of this care. Men typically were not included in KMC counseling due to societal gender roles. Health facilities were the main source of information on KMC, however informal networks among women provided some degree of knowledge exchange. Community leaders were regarded as major facilitators of health information, conveners, key influencers, and policy-makers. Religious leaders were regarded as advocates and emotional support for families with preterm infants. Finally, while many participants initially had negative feelings towards preterm births and KMC, the large majority saw a shift in their perceptions through health counseling, peer modeling, and personal success with KMC.

The findings offer several opportunities to improve KMC implementation including 1) earlier introduction of KMC to pregnant women and their families that are at-risk for preterm birth, 2) greater involvement of men in KMC counselling, practice and care for preterm infants, and 3) strengthening and defining partnerships with community and religious leaders. Finally, as parental perceptions of preterm infants and KMC improved with successful KMC practice, it is hopeful that KMC itself can positively affect social norms surrounding preterm infants, leading to a virtuous cycle of improved perceptions of preterm infants and increased uptake of KMC.